About five months ago — actually at the after-show party of The Finn-Brit Players' production of I Hate Hamlet — my friend and fellow actor of many productions, Daniel McMullen, mooted a suggestion about he and I doing our own production together. At the time I was interested but quite hesitant. Apparently, this appeared quite negative to Daniel! After a little more thought, and the alcohol had subsided, I actually warmed to the idea and raised it again with Daniel. 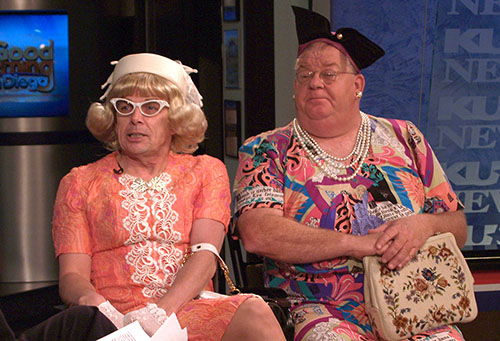 Jaston Williams and Joe Sears playing two of their characters, Vera and Pearl

The main reasons for wanting to 'go it alone' were all to do with flexibility. We had both been involved heavily in many productions with taxing rehearsal schedules essentially losing one day every weekend. Having a cast of two would mean rehearsals pretty much whenever and wherever we wanted. Instead of spending entire days in a rehearsal venue, we could rehearse at each other's home and still see our families, etc. It was also necessary to produce the show away from The Finn-Brit Players because their production rules won't allow directors to act in the same show, nor to pre-cast a show without auditions. So, if you think there is some sort of 'snob' factor involved, you are very mistaken. We have asked for the assistance and co-operation of The Players in staging the show. My main concerns in doing an independent production were cost-related, but we set this aside initially whilst we discussed ideas further. Over a lovely meal with both of our families, we threw a few ideas about and decided to start looking for two-man comedy plays. If anyone has ever tried this, they will know that it's not as easy as you may think!

At the same time as our play search, we approached Joan Nordlund, a long-standing and very experienced actor/director/producer with The Finn-Brit Players, and holding a wealth of experience from many other theatrical establishments. Initially we wanted Joan to be our producer, but she immediately offered the support and assistance of her own theatre company. This we gratefully accepted.

After a slightly frustrating search, we narrowed the field of potential plays to three: The Simple Process of Alchemy, The Mystery of Irma Vep, and Greater Tuna. Alchemy initially seemed very promising, but was disappointing by the third act and just tailed-off unfulfillingly at the end. Irma Vep is a cracker of a comedy/farce, but the necessary requirements of costume and set made it out of the question (at this time...).

On my first read of Greater Tuna, I was convinced. It was Daniel and my style of comedy coupled with an outrageous number of characters and quick costume changes. The story shows the audience an average day in Texas' third smallest town, Tuna. The characters are the epitome of small-town mentality all wrapped-up in the worst Texan small-mindedness and characteristics. Being from 'the Colonies', the play was already very well known to Daniel. He explained how popular it was, and still is, in the US, and also how it is George Bush's (Snr) favourite play. What better endorsement could there possibly be? 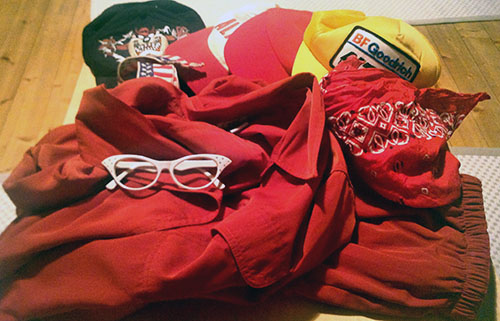 Some of our costume collection

The next hurdle was the search for a theatre to perform in. We originally wanted to perform the show in October. However, in a city full of theatres, the task of finding one at a reasonable cost and size without ridiculous date restrictions proved a thoroughly annoying and frustrating process. Actually getting theatres to reply to emails appears akin to securing an appointment with the Pope! The replies were slightly more forthcoming when we changed tactics and emailed them in Finnish or Swedish (according to theatrical language preference). However, at the end of the day we were left with three possible weeks at the same theatre. Having promised not to conflict productions with our friends at The Finn-Brit Players, these weeks were reduced to two. When you read this blog post, you will know that we chose the first week in December. We are very pleased with the week and with the theatre, Tanssiteatteri Hurjaruuth in Kaapelitehdas (Cable Factory).

So, where are we now? We have been gathering costumes piece by piece. We have had numerous production meetings and read-throughs. Saga Blomster, a talented young comic artist, is creating some illustrations for us to use in show material. Our front-of-house and catering is already sorted. And we have an eager volunteer ready to be trained-up on lighting. Not bad seven months in advance!

Stay tuned and keep following the progress via this blog and Facebook updates!

More in this category: « Radio, blocks, and presidents
back to top