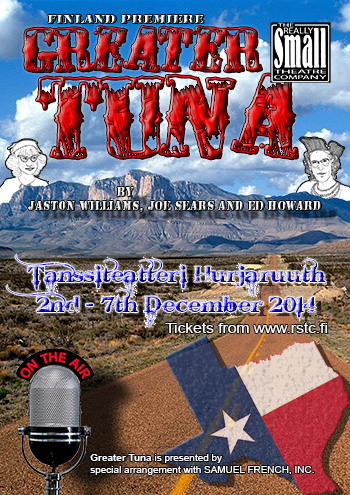 It's time for the first of many regular updates about the preparations and plans for Greater Tuna.

I am pleased to tell you that we have now had solid confirmation of permission to perform the show from the rights-holder in the US. There were some initial complications which slowed the process and had us all slightly concerned, but it all came through in the end. We suspect that there may have been a complication due to the show having never been performed in Finland. It's going to be a premiere, folks!

In addition to a premiere, we also have a special discounted ticket price in honour of Independence Day on the 6th December. Plus, all current and past Finnish presidents can have free admission for that performance!! We understand that Sauli Niinistö is seriously considering instead of the normal hand shaking. Wouldn't you?

Rehearsals are well under way now. Daniel, Joan and I met to discuss, agree and set the blocking down on set-plans for each scene. Blocking is a theatre term and means the positioning and movement of the actors. This paper blocking was followed by the physical blocking with Daniel and I mostly going where we planned. We were both very pleased that we managed to complete the full show blocking within a three hour rehearsal.

There are several recorded radio segments throughout the show and it is important that we have these at an early stage for timing purposes. For this reason, next week's rehearsal will be a recording session. This will be an initial recording and will probably be re-recorded later in the year. It is also very beneficial to us so that we can maintain the same voice styles, as these tend to 'wander' as time goes on.

If you attended The Finn-Brit Players' production of The Memory of Water, you will have no doubt seen our show flyer. This image design is probably the final one and will remain for all posters and the programme.

Our tickets will go on sale within the next week or two. We delayed releasing them as a courtesy to The Finn-Brit Players so there was no conflict with ticket sales for The Memory of Water.

Things in the pipeline include an exciting video teaser plan. I can't disclose much about it yet, but it will be funny and will introduce you to the feel of Tuna as well as some of the characters. Of course, this will be done in such a way so as not to infringe copyright, but let you properly see what the show is about.

That's it for now, but stay tuned. DON'T TOUCH THAT DIAL!

More in this category: « Quick Change Fishing for Tuna... »
back to top