Barrymore - the man behind the actor 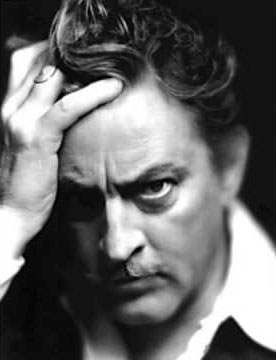 Whenever an actor portrays a real person in a stage or film performance, it is very important to research that person outside the boundaries of a script. If a character really existed, there is a very good chance one or more of the audience will know about them and have certain expectations that you will give a reasonable representation. If there were photographs and recordings of the character, there are even more expectations. As a director, it is just as important to ‘know your man’ as the actor portraying him. You need to pull the real man out.

A few years ago I portrayed John Barrymore in another production and did some cursory research into the man. The play was much more light-hearted and didn’t require a great deal of detailed background knowledge. Barrymore is all about the man. It is billed as the man rehearsing for a comeback performance of Shakespeare’s version of Richard III, which he portrayed on Broadway to great acclaim earlier in his life. In actuality, this is really the back-story. Through Barrymore’s own on-stage banter, we learn a great deal about the man, his weaknesses, strengths, and downfalls.

My research revealed two families—the Barrymores and the Drews—bound to theatre and film for over a century. John Barrymore’s father was a theatre actor, his brother Lionel and sister Ethel were both equally famous film actors. Two of his children, Diana and John Drew, were film actors. His granddaughter is Drew Barrymore. The Drew line (his mother’s family) was equally prestigious.

The families had (and have) a penchant for marriage. Both lines show each member having married at least twice. Barrymore himself was married four times.

The Barrymore family also had a seemingly hereditary affliction with substance abuse. First John, then his children, then his granddaughter. His daughter Diana died prematurely from alcohol abuse. His son John Drew was a violent drunk and played a part in Drew’s substance abuse at a very young age.

However, in amongst all of this were the triumphs. John Barrymore acted in over sixty films, including several with Lionel and Ethel. He gave two much acclaimed Broadway performances as Richard III and Hamlet. His Hamlet won him praise as being the best portrayal of his generation. The same portrayal is also considered the second best of the 20th Century (after John Gielgud, no less).

His lifestyle eventually took its toll though. He collapsed whilst recording a radio show on the 19th May 1942 and died in hospital ten day later from cirrhosis of the liver and kidney failure, (complicated by pneumonia). His final words, characteristically, were, “Die? I should say not, dear fellow. No Barrymore would allow such a conventional thing to happen to him.”

Why not join us this Saturday (7th November) evening and experience a little of the Hollywood legend himself?

More in this category: « Ingrid is finally here! Quite Frankly... »
back to top