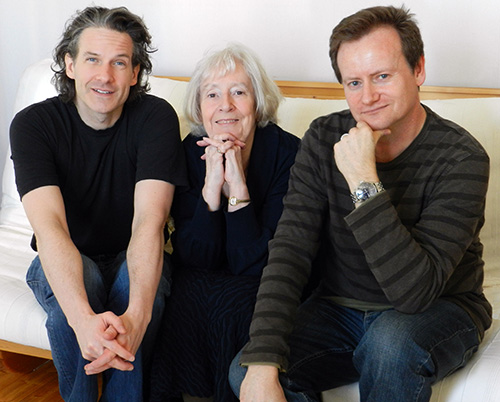 The directors and producer: Daniel, Joan, and I

Director and Producer. You see these titles all the time with regards to theatre, films, and television. Some people know the difference. Others think they have a vague idea. Most don’t even notice. So what is the difference? I’ll borrow a few terms used by others.

The Director is the chef.

Everyone in the room is working towards the entree, but it's the Director who has chosen the exact ingredients and who puts it together in just such a way as to make it a masterpiece. Or a fallen soufflé. Whichever.

Wishing to step back from taking a ‘major commitment’ role for The Really Small Reminiscences I offered to produce the show. Although I had previous dealings with aspects of the producer’s role, this is the first time I’ve actually done it entirely for a major production. Although it’s not hugely difficult, I am grateful for my many years of knowledge and experience of theatre to call upon. I am also learning the importance of To Do Lists. If you don’t make a list, things easily get missed, overlooked or forgotten.

It is a very interesting experience having three separate plays, casts, and directors. In my capacity as producer, I am like the overseer. In this role, I don’t advise on how each play develops, but I bring them all together and in the darkness bind them. Err…well. We have our first combined rehearsals after Easter, and it will be my job to make sure these rehearsals run smoothly overall and that we are all on course for a combined show.

Unexpectedly (but happily), I offered to direct Joan in one of the three plays, A Cream Cracker Under the Settee, when the requirement arose. I vaguely remembered this monologue as part of the Talking Heads series on the BBC during the 80s. This is a thirty minute show with one actor. Had it been bigger, I would have declined directing. I have a very firm belief that director and producer roles should never be mixed. This is for reasons of commitment and workload. The director should be concentrating entirely on the artistry of the show, and not be distracted by logistics and incidentals. Combining the two can create huge stress and both roles can suffer. Directing one actor with a static stage set and basic lighting and sound is manageable with the producer-role. If I had to direct another three or more actors with set and scene changes and get the whole show on stage…O.M.G.

As with Greater Tuna I am really enjoying working with this bunch of people. The whole experience is quite hassle-free and everyone is eager to help and no-one is unduly awkward or attention-seeking. Long may it continue!

More in this category: « What would you say? I want to hear about you »
back to top