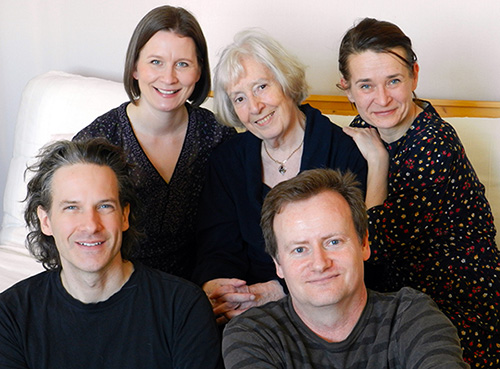 The cast and directors of 'The Really Small Reminiscences'

This was my first introduction to David Mamet.

It’s an old joke and one that quickly and simply portrays Mamet’s style in the use of language. Many of his plays and screenplays use what has been termed “Mametspeak” which is very basically a form of “street language” that uses a mixture of blunt, truthful straight-talk and a sprinkling of profanity. Mamet’s own words regarding his use of colorful dialogue, “The people who speak that way tell the truth. They don’t institutionalize thought.”

Mamet’s Reunion contains only a few words of profanity and a whole lot of straight-talk between two people who have not seen each other in 20 years. The “Mametspeak” is used to great effect to create an uncomfortable atmosphere between these two characters – delves deeper into their respective experiences displaying a vulnerability and an honesty from this very personal interaction. Each character has overcome obstacles to bring them to this moment - this reunion.

For all the (positive and negative) attention that Mamet’s use of language receives, he is also equally masterful at creating elements of unspoken moments allowing actors to accentuate mood, relationship and build tension. Reunion allows ample space for these extremely poignant moments. Riikka and I have been working hard together to understand and create these moments and allow them to breathe further life into the play and the two characters. We are excited to present this challenging play in the first two weeks of May.

More in this category: « Among the Lentils
back to top